You are here: Home / Sushi Tools / What’s the Difference Between Sushi and Nigiri?

If you love sushi, you’ve probably eaten nigiri. Nigiri is often served in sushi restaurants and is even considered a type of sushi, but it has characteristics that set it apart. So, what is the difference between sushi and nigiri? 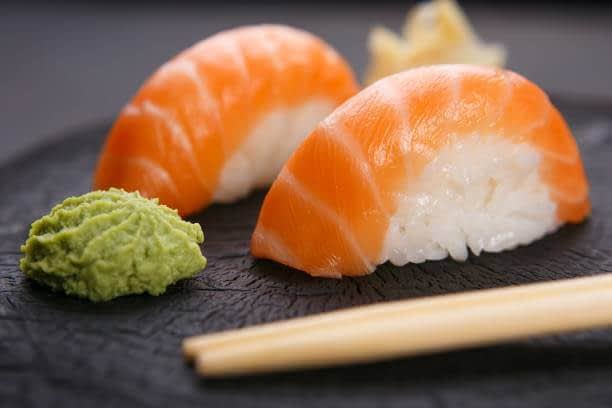 Nigiri is created with raw fish and sushi rice, just like sushi. Nigiri is in fact a form of sushi. However, fish and rice rolled into a seaweed wrap, or “maki” roll, is how sushi is most frequently referred to. Nigiri is sushi, however not all sushi is nigiri.

Nigiri is a compacted rice dish that is often fashioned into a rectangle. Typically, raw fish is placed on top, but vegetables can also be included.

The way that nigiri and sushi are made is different.

Sushi is typically prepared on a sushi mat, with each item added in accordance with the desired roll pattern.

As an illustration, you might begin with a layer of seaweed, followed by a layer of rice, and finally a layer of fish. Roll all the ingredients together using a mat.

In the meantime, you take the rice and push it with your finger to make nigiri. The form should be somewhat rounded at the top and flat at the bottom. It will fit well on the plate thanks to the flat bottom. Slice the toppings (fish or veggies) extremely thinly—about 1 cm. thick. The wasabi should be placed on top of the rice, and it should have enough height and width to cover the rice without spilling over the edges.

The two foods have different origins. Sushi originated in Japan and the tradition of storing fish in fermented rice to preserve it. Finally, vinegar is added to enhance the taste.

Nigiri sushi was made not long after. Legend has it that a sushi vendor named Hanaya Yohei invented it as a way to quickly bring sushi to society.